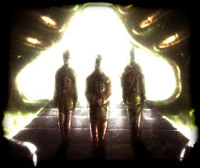 Today’s Chronicle is perhaps the most famous of all of Eve’s backstories – the story of first contact between the Caldari State and the Jovian Directorate as well as the story of the first capsuleer. If a list ever existed consisting of the top five essential stories for understanding the lore of Eve, this chronicle would be on that list and probably at the very top of that list.

This Chronicle is such a prominent fixture of the lore that I used it for my trial episode, aka “Episode 0” when I first envisioned the Eve Reader podcast nearly four and a half years ago. So much has changed! In that time I have upgraded my microphone from a USB web camera microphone (which was already four years old when I started in 2013!) to a studio-quality Shure SM7B microphone. I also polished my editing and production techniques in order to create a cleaner sound with better production values.

While I was pleased with the overall result when “Episode 0” was released back at the beginning of 2013, it always nagged at the back of my mind. After all, I used one of the best introductions to the lore and turned it into an experimental prototype for the podcast. What if people listed to it and stopped there, with its rather scratchy audio and too-long intro and extro sections? Wouldn’t it be nice to take such an important story and re-do it in a more modern format?

Thus the idea for redoing this Chronicle was born. For those of you who have heard this story before, I encourage you to share the link to this file with those who have never heard the lore before – and if you have never read or heard of the Jovian Wet Grave, then turn down the lights, turn up the volume and listen to the joy and terror of the first ever capsuleer in Eve.

If you would like to reach me, my email is zendane [at] evereader [dot] org.